Tucked into the hills of Komatsu about a 20-minute drive from Komatsu Station are the Hanibe Caves ハニベ岩窟, famous for their many Buddhist statues and the parody of hell. 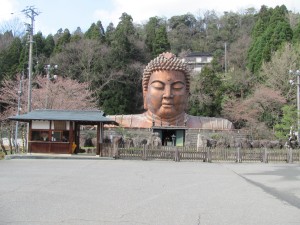 There are no information pamphlets in English, but you will receive a map of the suggested route upon entry. A giant statue of the Buddha’s head and shoulders marks the entry, as, as my partner noted, looks like it might open its eyes, rise up out of the ground, and stomp off to fight with Godzilla.

There are statues and shrines on the way up the hill to the caves. Inside the first cave, make a wish by buying a ceramic piece, writing your wish on it, and throwing it into (or near) a ceramic basin. 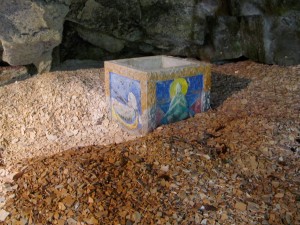 The first section of the caves features Buddhist art from India–statues of various saints, depictions of the Buddha’s childhood–and a host of statues in flagrante delicto. A stone Kama Sutra, if you will.

The parody of Hell is much less fun than the imported statues from India, but, in being a parody, is still pretty entertaining in a grotesque way. There are statues depicted (Buddhist) punishment for various sins, and at the end, more saints to redeem you. Afterward, if your legs are strong enough and it’s not raining, climb the path to the garden on top of the hill, where Shakamuni Buddha reclines. 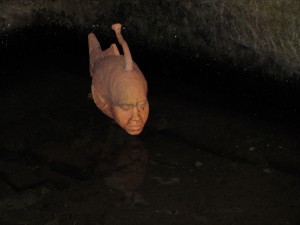 My impressions of the place were mixed. While I enjoyed seeing “heaven” and the natural beauty of the place, the abandoned atmosphere gave me the heebie-jeebies. However, if you have an interest in Buddhist art, Hanibe Caves makes for an interesting afternoon.

Leah Zoller is a first-year CIR in Anamizu and landed her wish right in the middle of the box.

Take the 8 to the 360, pass the Family Mart and look for the signs around the 軽海 intersection.

Open throughout the year

Adults: 800 yen
Children (up to and including high school students) 500 yen
Free of charge on the New Year’s Day

One thought on “Hanibe Caves”

Something on your mind? Leave some comments! Cancel reply